To share your memory on the wall of Ellen Boatner, sign in using one of the following options:

As a young woman, Ellen worked as a secretary in downtown Chicago. In 1946 she married her husband, Victor Vincent Boatner, a railroad executive and consultant. They lived in Chicago until Victor died in 1950. After Victor's death, Ellen traveled throughout the United States by train. She settled back into her family home, where she took care of her aging parents until her mother died at the age of 99. After a few years living in Tinley Park and Oak Forest, Ellen eventually moved into her own condo in downtown Flossmoor, Illinois.

Ellen was a family person. Throughout her life she stayed in close contact with her brothers, sisters, and cousins, and was much loved by her nieces and nephews. Ellen had a big and generous heart. Her nieces and nephews have many fond memories of fun times with her. She was always ready to a play a game or help with a project. She taught several of her nieces how to sew. Ellen loved knitting, sewing, garden fresh vegetables, anything Dutch, nature (especially birds), and reading. She was a life-long learner. For her hundredth birthday her family and friends gave her one hundred books, most of which she read.

Ellen was preceded in death by her eight brothers and sisters and their spouses: Claude and Vera Kramer, George Kramer who died in infancy, James and Marian Kramer, Willis and Virginia Kramer, Ralph and Florence Kramer, Ethel Kramer, Roy and Jane Kramer and Esther and Bill Greene. Ellen is survived by her many nieces and nephews, their children, and grandchildren. For the last six years of her life Ellen lived with Susan (Ellen's niece) and Bill Haas, who, along with their daughter-in-law, Jess Lobbezoo, were Ellen's caregivers.

A memorial service will be held for Ellen next year. She will be buried next to her husband Victor in Mt. Hope Cemetery in Chicago.

Receive notifications about information and event scheduling for Ellen

We encourage you to share your most beloved memories of Ellen here, so that the family and other loved ones can always see it. You can upload cherished photographs, or share your favorite stories, and can even comment on those shared by others.

Plant a Tree in Memory of Ellen
Plant a tree 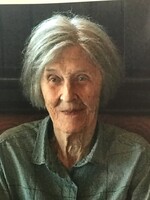 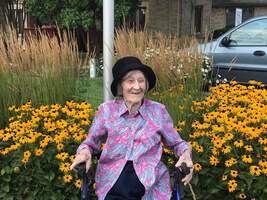 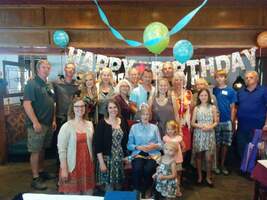 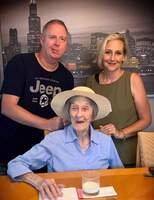